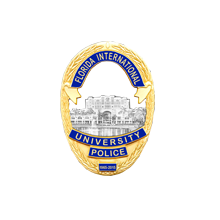 FIU Celebrates 50 Years of Service with an anniversary badge

​In 1965, Florida Senator Robert M. Haverfield introduced Senate Bill 711, which instructed the state Board of Education and the Board of Regents to begin planning for the development of a state university in Miami.  In June 1965, the governor signed the bill into law and Florida International University (FIU) was on its way to becoming a reality.  During the period of growth, the Florida International University Police Department was also established.

​In 2015, the FIU Police Department will be celebrating its 50th Anniversary, so they approached Blackinton to get help developing a commemorative badge that officers could wear during 2015.

​Blackinton designed this two-tone oval beauty featuring FIU in the center.  The piercing above FIU adds a level of complexity and uniqueness to this beautiful badge.

“The FIU police department, led by Police Chief Alexander Casas, is honored to celebrate its 50 years of service with a custom designed commemorative police badge made possible by Blackinton which will be worn throughout the commemorative year of 2015.  This badge recognizes the growth of the department and honors the hard work, dedication, and commitment over the last 50 years by members of the FIU Police Department.​” –David E. Navas